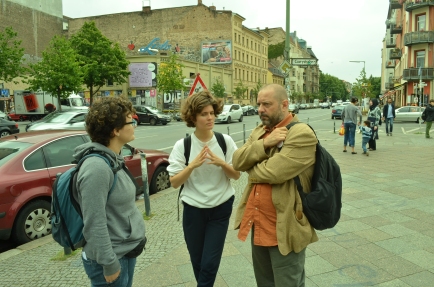 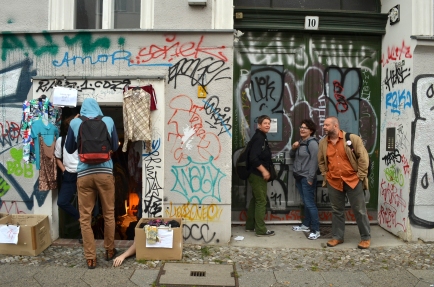 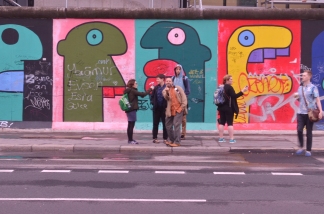 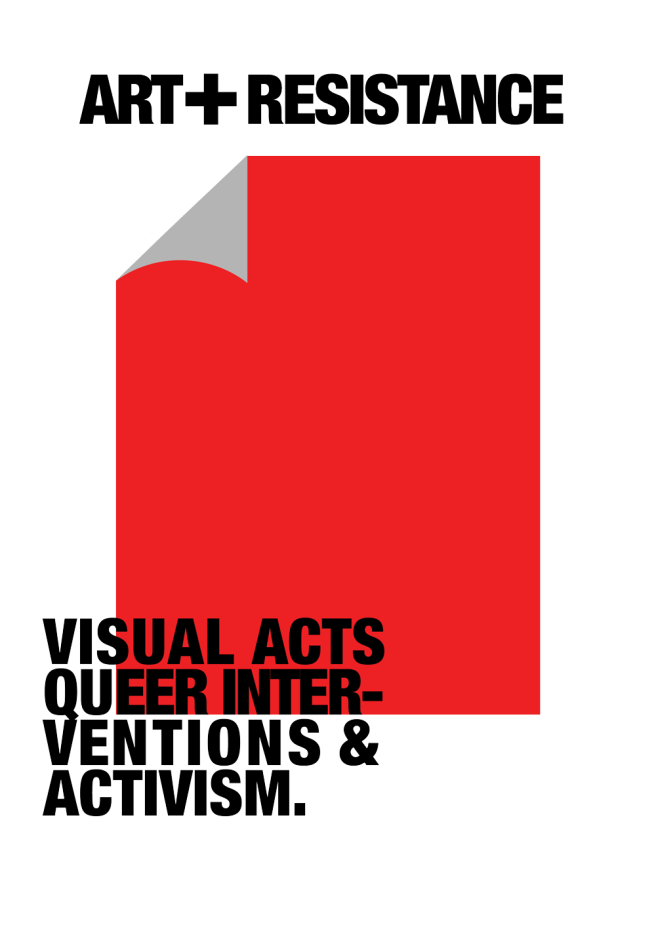 I Transforming the Public through Queer Interventions

II What does the + do to Art+Resistance?

III Empowered through Art under Conditions of Violence

Gender, Violence and Visual Activism focuses on questions of visuality, visual culture, and art in order to widen perspectives on sexualized and gendered violence. It seeks to provide a deeper understanding of the history, scale and effects of violence against women and LGBTIQs. Furthermore, it is particularly interested in exploring forms and expressions of resistance as well as strategies of opposing gendered and sexualized violence through cultural means.

The primary focus of the project is on visual activism and the ways in which activist strategies that employ images might challenge normative and symbolic forms of violence, and ultimately, work towards mitigating physical violence. This includes asking what the term visual activism means in different contexts and at different times. It also means asking both about the potential violence of images and the semiotics, aesthetics, and effects of images of violence.

In order to account for epistemic, symbolic, and normative violence and the ways in which they are bound to physical violence, the project combines perspectives from the social sciences and the humanities, but also values every-day and activist knowledge production.

The first workshop took place November 23-27, 2014 in Kalk Bay, Cape Town. Its focus was on questions of violence and the ways in which violence is enacted, experienced, conceptualised and resisted in different locations and contexts. Discussions about how we conceptualize violence – highly relevant for understanding what is meant by terms like ‘discrimination’, ‘coercion’, ‘hate crimes’, ‘corrective rape’ and the intersections between gender normativity, homophobia and racism – provided for a shared, though contested vocabulary, as well as attentiveness to different political challenges and visions. Artistic practices and aesthetic strategies were discussed in reference to concrete material brought by the participants. During the public event “thinking against violence. queer perspectives” (26 Nov 2014 at Centre for African Studies Gallery, Cape Town University) screenings, life presentations, and readings inspired deep listening and lively discussions.

Gender, Violence, and Visual Activism is conceptualized and facilitated by

“…the phrase ‘pleasure and danger’ still remains resonant and provocative in describing women*’s sexual situation. […] At the individual level, it explains the mix of fear and excitement that women often feel when they approach sexuality. At the group level, it speaks to the differences among women* who, depending on personal history and experience, may want to stress safety or adventure at various times of their lives. Here, the concept is intended to offer a generous framework for understanding difference. It suggests that women*’s relationships to sexuality will be diverse, not singular, and that any feminist program that requires uniformity in women*’s responses will be dishonest and oppressive. […] An exclusive focus on danger […] doesn’t empower our movement with women*’s curiosity, desire, adventure, and success. The notion that women* cannot explore sexuality until danger is first eliminated is a strategic dead-end.”
(Carole S. Vance, 1992: xvi-xvii; new introduction to Pleasure and Danger. Exploring Female Sexuality, originally published in 1984, London: Pandora. * introduced by antke engel, in order to denaturalize the term.) 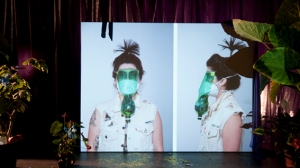 The film Toxic (2012) shows two protagonists in an undetermined time: a glamorous punk figure (Ginger Brooks Takahashi) and an imposing drag queen (Werner Hirsch), both of unclear gender and origin. They linger in an environment of glossy remains and a forest of toxic plants. The background images of transformed ethnographic and police photographs are projected on a screen in a rhythm set by the clicks of a camera. The punk’s speech and performance reference early feminist artworks such as Yvonne Rainer’s dance piece Inner Appearances and Mierle Laderman Ukele’s grooming of art institutions. The drag queen reenacts an interview with Jean Genet from the 1980s and blames the filmmakers for exposing her to the police-like scenario of being filmed. The camera turns and depicts the space-off, the space outside the frame, thus revealing the apparatus of film production and the personalization of its regime.

When Pauline Boudry and I started our research about the discourse on and employment of “toxicity,” we initially focused on the so-called mug shot. The mug shot—invented in the late nineteenth century—is a way to photograph a human with two cropped and paired sights, one frontal, the other from profile. It was used by various state and scientific institutions, such as the police or anthropology, to identify “characters,” which meant, to install social hierarchies and to legitimize privileges. The photographers and viewers acquired normalcy and privilege through marking the photographed as criminals, sex workers, homosexuals, black people, and people from the colonies. This history fundamentally troubles the usage of the visual and photography in contemporary art: How can we produce, in the frame of this violent history of visualization, representations of bodies that rupture and queer this legacy of violence? […]

Our shooting took place in Paris, where the film was supposed to premiere as part of the Paris Trienniale, which was entitled “Intense Proximity” and dealt with French anthropological and colonial history. Accordingly, the Paris World’s Fairs of the late nineteenth and early twentieth centuries were ghosts that accompanied our search. Pauline and I discussed W.E.B. du Bois’s series of 363 photographs called Types of American Negroes, Georgia, U.S.A, , which were his contribution to the American Negro Exhibit at the 1900 World’s Fair in Paris and won him a gold medal. While largely making use of the mug shot, Du Bois’s photographs still might be seen as toxic to the legacy of racist taxonomy and eugenics, which were so overwhelmingly present at the World’s Fair. [¼]

The discourse on toxicity alludes to many different fields of politics, especially those touching on the body, such as HIV/AIDS and the history of AIDS movements, illness in general, and the engagement of patient movements (e.g., the SPK, or “Socialist Patient Collective”), drugs, and the question how they intervene into the pace of capitalism, bodies in transition and the freeing of hormones from medicalized practices. Furthermore, toxicity and media have an intimate relationship. Yet they are by no means monogamous, but rather develop multiple and dynamic connections that could be called “toxic assemblages.” Mug shots intoxicate bodies that are captured by the criminalizing or pathologizing gaze. Subjectivities, insinuated as toxins of the social body, inhabit fantasies and travel in media images, thus becoming self-fulfilling prophecies. The usage, production, and circulation of media technologies spread poison globally, although in highly differentiated and differentiating ways.

Yet assemblages are neither stable nor foreseeable. Therefore, the question is where and how toxicity may also develop pleasurable, enabling, surprising, and curative effects. How might media and technologies that poison and hurt also cure and empower? Are there strategies of intoxication that can be turned against themselves? And could the intoxicated social body become the home of queer socialities?

“Transferred memories, embodied documents” focuses on the confrontation with images of atrocities and those who face them. It emphasizes the affective reaction of the viewer in front of images of atrocities in order to create a different way of dealing with the affective reactions the images evoke. The video starts with a complex description of the video report on camp Omarska, made in 1992 by the ITN journalists Penny Marshall and Ian Williams. It stays very close to practices used by newspapers and the TV, which grabbed an image from the video footage and made it into an “iconic photograph” for the Bosnian war. The pictures of Fikret Alić and other prisoners behind a fence topped with barbwire became the headline for many newspapers that reported on the Bosnian War, juxtaposed with images of emaciated men behind barbwire made around the end of the Holocaust.

The video installation “Transferred memories, embodied documents” begins with a shot of a dark silhouette, shown from the back facing a projection of a text. Only some parts of this text are legible; the projection does not allow the viewer to read whole sentences. One word is placed very centrally – Omarska. The figure in front of the projection stands still then moves only slowly to one side, as if she would first read the text and then move away from it.

The video continues with two voices stumbling on a text. Words like “barb wire,” “camera move,” and “naked bodies” appear with no contextual, or referential frame offered to help identifying them. One voice seems to be describing an image; fragments of speech, indicating that this description is not an easy one, interrupt long periods of silence. A second voice stumbles over words about facial and bodily expressions, such as “shoulders moving” or “eyes twitching,” interrupting the description with a sort of comment. The text continues showing the same close-up as before, this time the face belongs to a performer who is in conversation with someone outside the frame, someone only present through his/her voice. The viewer is placed in a position between the two, but mainly challenged to open his/her own imaginations about those given fragments of speech.

In the next shot the same figure is shown,  a close-up of her face. She is clearly observing something outside of the frame, something not visible to us, yet apparently facing the viewer almost directly and frontally. Her eyes move slowly, indicating that she is reading a text, which might be the earlier text (referring to the camp Omarska) yet her lips do not move and there is no sound. One is excluded from this reading situation. All one might get to know is that something in this text evokes a strong emotional reaction in the woman. The figure is close to tears and a cut interrupts the continuation of her emotional reaction.

“Transferred memories, embodied documents” creates a queer relation between two performers who deal with images of atrocities together. They both describe their view of these images and listen to each other’s descriptions of their reactions, thereby gaining recognition for their affective responses in front of the images. However they do not depend either on an identification with the bodies shown in the footage nor on an identification with each other.

In „Transferred Memories, Embodied Documents“ Hoffner works on the question of comparison of images of violence, specially images of the Bosnian War and the Holocaust and the question how these iconic images can be opened for a different look/understanding. Images of violence are only described in Hoffner’s video, which visually refers to Ingmar Bergman’s film „Persona“. Referencing Bergman allows Hoffner, much more than the original, to make the positions not clearly assignable through the similarity of extreme close –ups of two performers in combination with the separation of body and voice. Hoffner challenges the viewer to rework postures, body language and speaking of images of violence with hints but without concrete bodies and categories. As Hoffner hirself formulates precisily, this approach allows difference to appear without being appropriated and „explained“ or compared to others by dominant narratives.